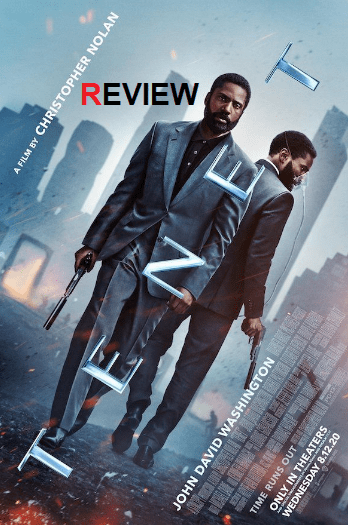 Friends, in this post you will read a review of the best Hollywood film Tenet. The film is a science fiction action-thriller film directed by Christopher Nolan. Who does not know Christopher Nolan, he is credited for making the best films like Memento and Inception.

Once again in 2020, he has made a very good science fiction action-thriller film. Which you must see. Because Christopher Nolan has the talent to make excellent educational films as well as mind-boggling films.

His talent has won him 10 Oscars. His directorial films have grossed over US $ 5 billion worldwide. Last year in 2020, the film Tenet was released in India on 4 December. Let us know what is in the movie Tenet –

As mentioned above, the Tenet film is a science fiction action-thriller film, in which a secret agent stops the Third World War in the world by traveling time. Very amazing story. To understand that, you have to watch the film at least 2 times.

John David Washington in the lead role of Tenet Movie’s Star Cast as a secrete agent. Twilight film star Robert Pattinson is in his supporting role, both of them perform very well.

Bollywood actress Dimple Kapadia of our country INDIA has done a great role in this movie and you will be thrilled to see that apart from this, there is Elizabeth Debicki in the film who played the lead actress in the film. Tenet is the main villain of the film, Andrei Sator, who has revived the character with his acting.

Among the people who you will particularly like to act in the film are John David Washington, Robert Pattinson, Dimple Kapadia and yes, the film’s villain Andrei Sator.

The entire story of the Tenet film is based on an Algorithm-made weapon and Reverse Entropy. Now those who know what is the Reverse Entropy should also see this film because there are such exciting scenes in this film which will be a wonderful experience to watch.

A weapon made by the Algorithm in the future that can do Reverse Entropy, with the help of which the hero travels time and changes events according to the story. To see and understand, you have to watch the movie.

The film begins with an opera function, where some masked bombs are placed on the hero, where the hero fires a bomb, but a bomb explodes, with the next scene in which the hero is tied to a chair on the railway track and he gets some goons third. Degree torture.

The hero eats the cyanide, and dies, wait. In the next scene, he senses in the hospital where he is told that this was his loyalty test for his country, in which he passed. And now he is selected in TENET.

He gets a mission in which he will have to stop World War by traveling time. Now how does he stop this world war. You have to watch the film to see what difficulties and how your hero goes through the adventures. And yes, sharing the post once after watching the film trailer.

In the movie Tenet Story, which will turn the stream of time back and shake the mind, you will see such action sequences that will spin the mind. The visual effects, background music of the film is tremendous. Understanding the story of the film Tenet is no joke.

The talent to make great filmmaker Christopher Nolan an excellent and mind-boggling film is well known. 10 Oscars is a proof of this. Understanding Christopher Nolan’s fantasy and watching this science fiction movie is an achievement in itself. You must watch the film once.